MANHATTAN — It’s rare — and cumbersome — for a renter to do a deep dive into a building’s history to uncover violations or potential landlord/tenant problems before signing a lease.

But Yale Fox, a TED Fellow focused on income inequality and housing rights, thinks it should be a standard part of the practice.

That’s why his Rentlogic website, currently in beta mode, is trying to make it as easy as possible for renters to quickly understand whether a building is riddled with problems or a landlord has been behaving badly.

Using 8 years worth of open source data from various government agencies — including reports on vermin infestations, mold problems or construction violations — the site uses an algorithm to assign each of the city’s 1.1 million residential buildings a letter score.

Rentlogic then allows you to search current apartments up for rent — which come from brokerages and rental listing feeds — by neighborhood and displays them from best to worst. If you’re checking a building that has a low score, the site will also show you nearby rentals for the same price with higher scores.

“It’s not a level playing field between landlords and renters,” Fox said. “Landlords want to keep operating costs as low as possible and rent as high as possible. And it’s an uphill battle because the New York real estate industry is so well-financed.”

“If you look at buildings, there’s no relationship between what you pay and the services you get,” said Fox, noting that buildings in the $2,000 to $5,000 a month vary widely in their scores, from “A” to “F.” 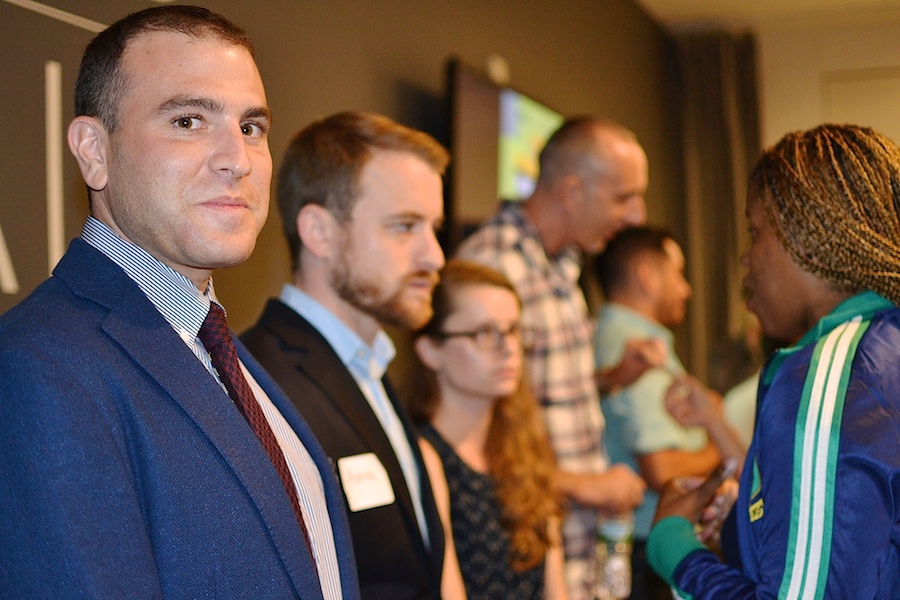 Yale Fox at a recent event he organized with the mayor’s office bringing together more than 100 housing rights groups.

According to the Rentlogic synopsis for a Lower East Side tenement with an “F” rating — where a two-bedroom is currently on the market for $2,900 a month — the building has a history of heat and hot water problems and faced legal action. RentLogic also includes more raw data about the building, revealing such problems as roach and mice infestations, bed bugs and a leaky roof.

Most buildings in the city got a B rating, at nearly 35 percent, according to RentLogic data obtained by DNAinfo. Roughly 21 percent were Cs, 19 percent scored D, 16 percent got Fs and about 9 percent were crowned with As.

He said it was “incredibly needed” in a city were so many tenants spend an “outlandish” amount of their income on rent.

“This creates a user-friendly platform to make informed decisions, which is especially important in a city where half of all renters are rent burdened — paying 30 percent or more of their income on rent,” Carr said. “The expectations are unfair that renters in their busy lives should learn real estate law and the real estate realm, in general, to figure this stuff out themselves.”

Carr was among more than 100 tenants rights groups that met earlier this month for a #HackHousing event that Fox hosted with the mayor’s office to discuss ways these organizations could use technology to better coordinate efforts as he looks for other ways to empower tenants.

In Toronto, the other city where Fox is piloting efforts, he helped create a website identifying the city’s worst landlords and helped push for its controversial new $12 to $15 per unit licensing fee for landlords.

“Renters never really come first,” Fox said of websites that provide information about rentals, which typically rely on making profits off of landlords or brokers who want to promote their units. Rentlogic, on the other hand, expects to make revenue from directing users to other sites where you can buy rental insurance, movers or cleaners, for instance, that will be vetted by a third party.

Fox continues to add data to the site, as tenants log about 4,000 complaints a day with the city. Plus, he’s encouraging renters to add reviews of their buildings directly to Rentlogic.

“We’re going to be as open as possible,” Fox said of the grading process. But, he added, “We don’t show everything. We don’t want people to start gaming the algorithm.”

#HackHousing Proves That Not All Tech Bros Suck